For our purposes, I’m covering only Epson and Canon printers in this short primer on ink jet printers. Fine art prints require a wide gamut (range of colors) which requires printers using 6, 8 or 10 colors. Other than size—13″, 17″, 24″ are the most common—the main difference in printers is dye versus pigment inks.

Dye is exactly what it sounds like. A colorant (dye) is added to a binder (carrier) along with “secret” sauces for each manufacturer. Dye soaks into the paper and is less fade resistant if longevity is important as it generally is for fine art reproductions. It also smears and runs when exposed to liquids. Its most endearing quality is low cost.

Pigment, on the other hand, comprises tiny (0.1 – 2 micrometer) particles suspended in a binder. When applied, the pigment adheres to the surface and is much more color fast over time. It’s generally more resistant to smearing or running but the cost is greater. For fine art, pigment printers are a better choice.

Six colors is the minimum which includes CMYK + LC + LM (cyan, magenta, yellow, black, light cyan, light magenta.) Eight-color printers usually have CMYK, LC, LM, gray (light black) and light gray (very light black.) Most printers in this category also have separate matte black (MK) and photo black (PK) inks. However, you can only use one at a time.

Newer printers have 10 colors including CMYK + LC + LM + LK + LLK + Orange + Green (Epson) or Blue + Red (Canon). Canon also counts their gloss optimizer called Chroma Optimizer. As the name implies, CO is for glossy prints and doesn’t make any difference for fine art on matte surfaces. Claims of 12 colors usually count both PK and MK. However only one can be used at a time and Canon adds 1 for CO. 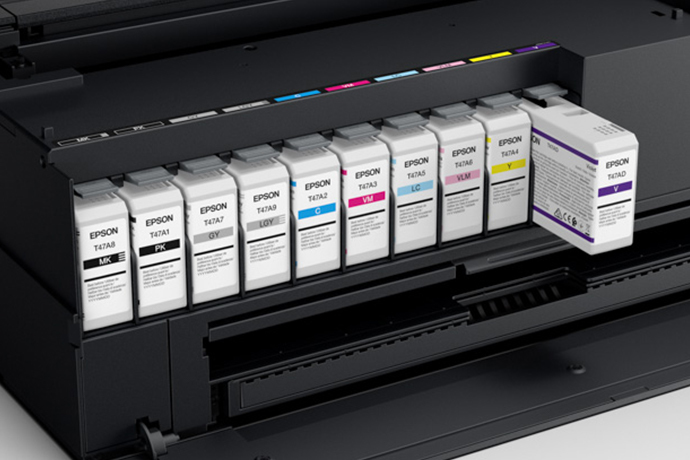 When new users first unpack this class of ink jet printers, they may not notice that some ship with “starter” ink cartridges that contain less than the full size cartridges (carts). This often leads to some angst as prepping the printer can consume as much as half the ink to fill all the internal ink lines and prime the print head. Epson ink carts range from 150ml (milliliters) to 350ml to 700ml while Canon carts include 160ml, 300ml and 700ml sizes. The larger the cart, the lower the cost per milliliter.

Smaller 17″ printers use smaller carts including 50ml for the Epson P900 and 80ml for the Canon PRO-1000. Thirteen-inch printers like the Canon PRO-10 have even smaller ~14ml carts. These can prove costly over the long run. Also, 13″ printers tend to use dye inks as opposed to pigment inks.

The last differentiator is roll versus sheets only. If you intend to print long (tall) prints such as panoramas or tall verticals, a roll feeder is handy. It is possible without a roll feeder but will be awkward. It’s very frustrating to print a long landscape and create a crease while trying to unload it.

Like everything else these days, software is critically important. Both Epson and Canon have eminently usable printing software but a 3rd party printing program like QImage Ultimate can make life easier.

This site uses Akismet to reduce spam. Learn how your comment data is processed.